In 2017, the Midwives of New Jersey hosted the New Jersey Symposium for Physiologic Birth: 2017 The Evidence for Choice. Jennifer Vanderlaan MSN, MPH, RN CNM FNP, presented the meta-analysis, (Neonatal outcomes with water birth: A systematic review and meta-analysis) she, Dr. Priscilla Hall, and Dr. Mary Jane Lewitt have compiled, showing evidence that water birth is safe for term neonates, 37 weeks gestation and after. The Vanderlaan et al. (2018) meta-analysis is now the largest waterbirth study published because it spans the longest time period and includes the largest number of studies on neonatal outcomes of waterbirths in hospital birth center setting compared to birth on land in the same setting. 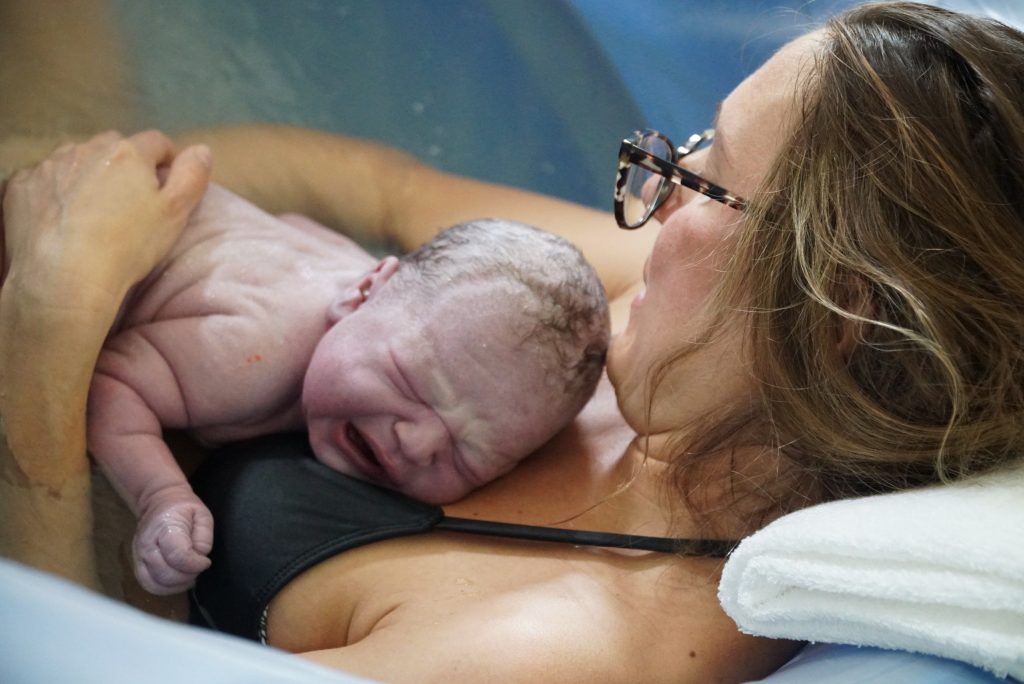 The American College of Obstetricians and Gynecologists 2016 opinion statement recommends birth on land rather than in water because of the lack of data to substantiate that waterbirth is safe for babies (Source). ACOG has proposed concerns about complications to newborns born under water. These potential risks include lower Apgar scores, pneumonia/infection or water aspiration (drowning). Vanderlaan’s study shows no basis for these concerns. There is a true risk of the umbilical cord tearing (avulsion). The cord usually breaks when the baby is pulled up out of the water very quickly. Usually, the person pulls too hard or too fast either because they are afraid of the baby breathing underwater or really excited that the baby is born. The danger of this happening is very low and the likelihood of complications from the umbilical cord breaking is even lower.

The meta-analysis addressed ACOG’s concerns about neonatal infection when a woman gave birth in water. They found studies showing no increased risk, if not lower risk, of pneumonia or other infections in waterbirth vs. land birth.  Barbara Harper RN, CLD, CCCE, Midwife, Founder of Waterbirth International, says “the solution to pollution is dilution”. All babies are exposed to the bacteria of the vagina and bowel during birth. When a woman is immersed in water, those concentrated bacteria are “watered down” which makes it less likely for a bacterial infection to occur.

The Biggest Takeaways from This Waterbirth Study Are:

The best type of medical study randomly assigns one group to a new treatment or procedure and the other group becomes the control receiving the usual treatment or no treatment at all. This is called a randomized controlled trial (RCT). These types of studies will legitimize waterbirth so it can be an accessible option for the women choosing it. The largest randomized controlled trial so far was done in 2013 in Iran.  It was performed to evaluate if there were any maternal-fetal and neonatal complications of water-birth compared with conventional delivery. There were 100 women in each group. The water birth group was allowed to move freely, and fluid intake was not limited. In the conventional delivery group, the birth was performed on land, in a typical hospital delivery bed.

Waterbirth does not increase neonatal infection or the rate of maternal and neonatal morbidity. Waterbirth is a safe option for women to reduce labor pain and improve the birth process.

Another study supporting the safety of waterbirth for moms and babies; Waterbirth: a national retrospective cohort study of factors associated with its use among women in England was published March 21, 2021 in the BMC Pregnancy and Childbirth Journal. The results have further confirmed the safety and advantages of waterbirth. This study looked at 46,000 low and moderate risk births comparing land birth to waterbirth in 4 different criteria:

There was no association between delivery in water and low Apgar score or incidence of 3rd/4th degree lacerations.

How Could Waterbirth Affect Apgar Scores?

Why Would Water Immersion and Birth Decrease 3rd and 4th Degree Lacerations? 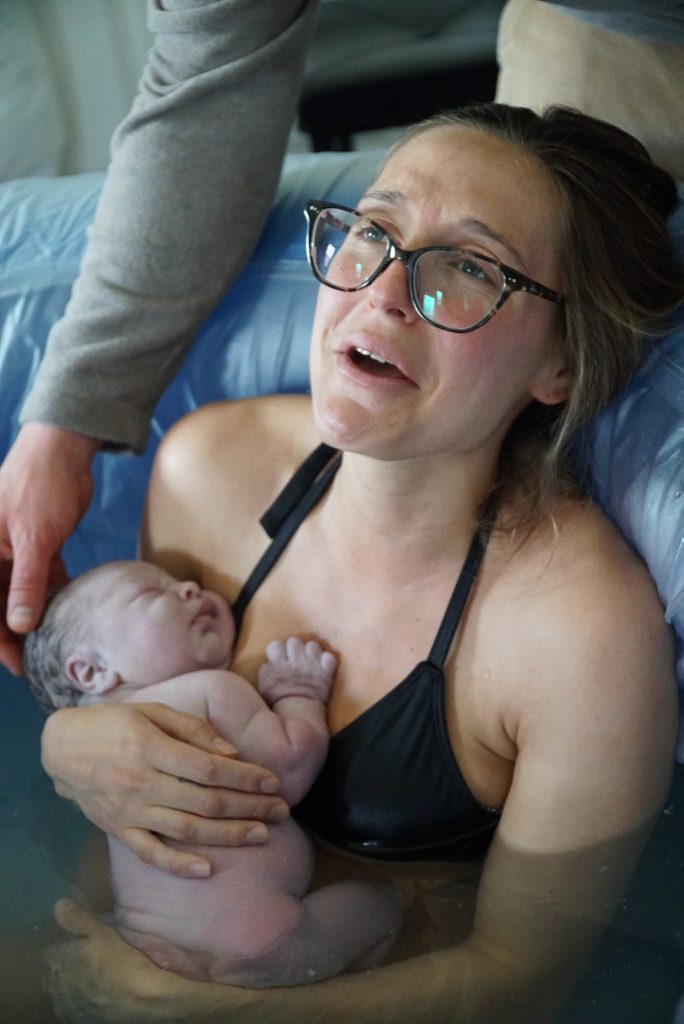 The results of another waterbirth RCT out of China showed the total duration of labor and the volume of lost blood were comparable between both water and land births. There were fewer perineal tears and episiotomies in the water delivery group. The amount of pain during the births was less in water delivery group. The Apgar scores were comparable between both delivery methods. The study concluded that waterbirth can reduce delivery pain without increasing the risk to birthing women and their newborns.

In January 2016, the Midwives Alliance of North America (MANA) published a large waterbirth study in North America to date titled “Maternal and Newborn Outcomes Following Waterbirth: The Midwives Alliance of North America Statistics Project, 2004 to 2009 Cohort.” The results show that waterbirth does not increase risk of morbidity or mortality for the newborn, but women completing the second stage, immersed in water, may experience more genital tract injury. These studies join with the Oregon State study to show that that being born underwater posed no additional risk of mortality or negative outcome to newborns. Hopefully, these findings will lead ACOG to publish a positive opinion about women choosing water immersion and birth and give the official green light to the Midwives and Physicians who wish to offer this effective pain management tool. This is good news for midwifery and natural childbirth!      WATERBIRTH IS SAFE! I believe that countless more studies will be published to confirm the safety of being born in a pool. The Midwives of New Jersey have long known of the safety of waterbirth – we have caught over 1500 waterbabies since the year 2000. 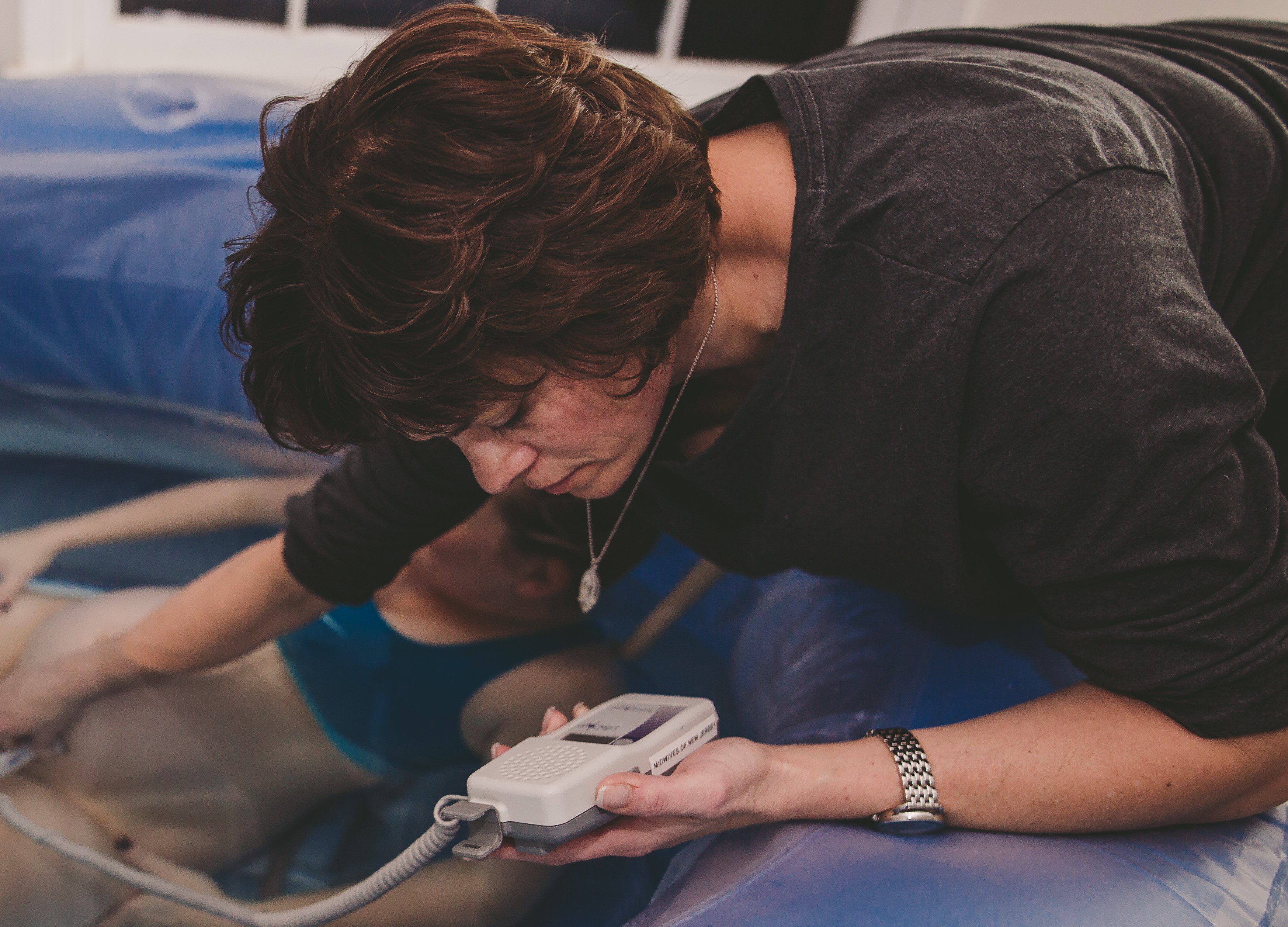 Because water immersion and waterbirth are often the tools needed to achieve homebirth and natural childbirth, these studies provide tremendous support for Midwifery in the United States. Midwives continue to only attend about 1/10 of the vaginal births in this country despite overwhelming evidence that midwifery care leads to better outcomes for pregnant women and their families. The Lancet, an esteemed British medical journal wrote a four-part series about Midwifery in 2014. The findings outlined in these articles stated that high quality Midwifery care is essential for improving maternity outcomes. A commentary of the articles written by the American College of Nurse-Midwives (ACNM) says the following:

While much of the Series focuses on developing midwifery in low and middle income countries, the key issues are applicable to all countries, including high-resource countries like the United States where over-medicalization of care in healthy pregnancies has led to rising calls for focused efforts for improvements in maternity care. Despite the availability in the United States of the most technologically sophisticated and comprehensive medical resources, outcomes for both women and children rank close to the bottom of almost all developed countries.

These waterbirth studies are fabulous news for the Midwives of New Jersey. I hope more studies are on the way, proving that waterbirth is safe in many circumstances, even in breech deliveries!!

Avoiding Cesarean: What is a Doula?
Next Post: Spotlight on Midwifery: Intermittent Auscultation